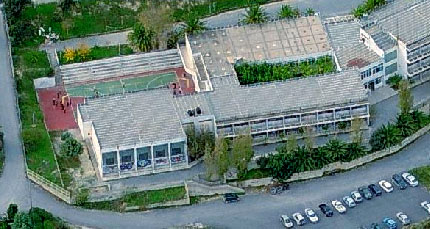 The Experimental General Lyceum (Upper Secondary School) of Heraklion (pronounced Piramatikó Yenikó Líkio Iraklíou, in Greek) was founded by the Ministerial Decision Δ4/131 of 6 October 1989. In December 1989 it welcomed its first students to the building of the former Academy of Pedagogy. In 1990 the school employed its very first teachers on a permanent basis.

Pursuant to 3966/2011 Law, on 19/9/2011 the school submitted its Evaluation Application and Portfolio, seeking its appointment as a Model Experimental School.

On 25/10/2011, it was ranked top in the evaluation process, and was pronounced as the Model Experimental General Lyceum of Heraklion. You may check the full scorecard, as well as the related press release by the school.

During 2013-14 and 2014-15 School Years, students were admitted to Grade A after a Written Admission Test, conducted in June (with applications running in March). Through a similar procedure, students are admitted to vacant positions in September.

As of school year 2015-16, despite its excelling at the above evaluation, its high quality achievements, and high entry candidate figures in the past two years, Law 4327/2015 (ΦΕΚ 50 τ.Α΄/14-5-2015) has brought the school to its previous status of being solely Experimental, as only a few so-called "Historical" schools remained as Model ones. Pursuant to the same Law, the school is now officially connected to the Experimental Lower Secondary School of Heraklion.

Consequently, the school exclusively accepts all of the Experimental Lower Secondary School graduates in its Grade A, and conducts a public draw only for vacancies.

In total, 1.583 students have graduated in the 30 years of the school operation. Currently, 237 students are enrolled in 10 General Education classes.

Since 1990 the school is housed in the building of the old Pedagogical Academy in the Estavromenos District, 6 km west of the city center. It shares the building with the Experimental Gymnasium (Lower Secondary School) of Heraklion, the Regional Teachers’ Training Center of Crete, premises of which are used by the Regional Centre for Educational Planning (PEKES) of Crete and the 1st Public Institute of Vocational Training of Heraklion. It comprises ten classrooms, a Library, a Computer Lab, a Natural Sciences Lab, a Mathematics Lab, a History Classroom and a Physical Education Hall; it also shares the complex’s Auditorium and Gymnasium. Interactive whiteboards are installed in the three labs, the History Classroom, the Auditorium and in two of the classrooms. This equipment, as well as all of the computers in the Computer Lab, were generously donated by the Stavros Niarchos Foundation in 2012. A wired LAN runs across all classrooms, labs and offices, providing Internet access via the Municipality's Optical Fiber, while roof video projectors are installed in all classrooms and labs.

Space shortage, lack of premises’ ownership, as well as no administrative or auxiliary personnel have been permanent problems for the school.

According to law 4610/2019, Model and Experimental Schools (PPS) are educational units that experiment with new curricula, timetables, educational tools, textbooks, other teaching material and methods, as well as operation modes for the school unit.

The aim of these schools is to cover educational needs related to research, training and the exchange of good practices.

At national level, the administration bodies of Model and Experimental schools are the same as the rest of the public schools.

The procedure and the selection criteria in model schools are defined each time by decision of the Minister of Education. It is published after consulting with the EEPPS and the school Teachers' Board.

Students get accepted in experimental schools exclusively by draw and under circumstances of total transparency. The Scientific Supervisory Board (EPES) is responsible for the implementation of the draw procedure together with the School Head, the school Teachers' Board and the Parents' Association.

The selection of students concerns the first year of entry (that is grade A of Lower Secondary School - Gymnasium). Student progression from Gymnasium to Lyceum (Upper Secondary) of these schools depends on school graduation exams.

As of September 2019, 15 teachers are serving an extension of a five year term, having successfully passed an evaluation procedure. Additionally, 3 teachers of the Experimental Lower Secondary School teach a few classes, another 4 highly qualified ones from other schools are serving on an one-year term, as well as a couple of deputy teachers. Historian and Language Teacher Maria G. Patamani leads the faculty as the School Head since 4 October 2018.

The School’s Scientific Supervisory Board is chaired by the Professor at the Dept. of Chemistry of the University of Crete and Director of the Institute of Electronic Structure & Laser at the Foundation for Research and Technology - Hellas, Spyros Anastasiadis, and comprises the Language, Literature and History Educational Coordinator, Liana Kalokyrι, the School Head and the school teacher Antonis Margaritis.

The school lacks any administrative or auxiliary personnel (secretary, caretaker, keeper or a psychologist) while its cleaning lady is on a part time afternoon schedule.

In view of the above, the Experimental Lyceum of Heraklion collaborates closely and continuously with the Regional Centre for Educational Planning of Crete as well as the University of Crete. It is affiliated with the latter's School of Science and Engineering, School of Medicine and the Department of Philosophy and Social Studies. Furthermore, it collaborates with the Hellenic Mediterranean University and the Patriarchal University Ecclesiastical Academy of Crete. In this context, it provides practical teaching training to students of various disciplines, as well as to fresh teachers. It also organizes exemplary teaching sessions promoting interaction and evaluation among teachers in the city of Heraklion. Furthermore, its teachers are active in education research fields and attend various conferences to present their work.

During the current school year it operates the following student clubs:

A range of additional School Activity Programs are run:

Last but not least, students and student teams are actively involved in inter-school championships in team sports such as football, basketball and volleyball, as well as in individual sports such as swimming, track and field and table tennis etc. claiming various titles. 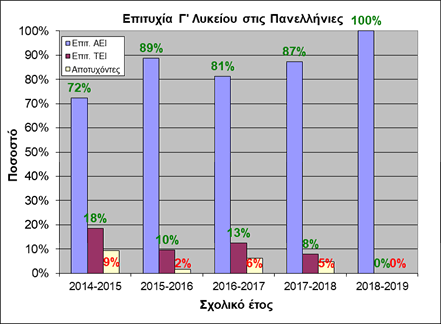 Of the 324 graduates in the past five school years (2014-2019), who participated in the National University Entry Examinations in their graduation year --rather than with subsequent efforts-- 279 (86,1%) achieved University entry, while 31 (9,6%) Technological Institution entry. Just 14 (4,3%) failed to enter Higher Education in their first attempt.

Official Statistics show that University entry ratios of our students is constantly and markedly higher than the average of Greece, our city and our prefecture.

Teachers in italics do not belong to our school.

More details on the Greek education system may be found at the respective Eurypedia entry.